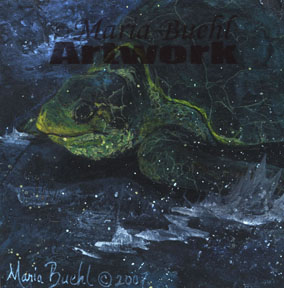 Olive Ridley Sea Turtle 4″x4″ – (Or the Pacific Ridley Sea Turtle)- On my first adventure trip to Goa, India my cousin and I were in search of the “turtle man.” Following many paths we eventually came to a small tent on the beach where indeed one man was on a quest to save the turtles. I was facinated to learn how he was trying to educate the tourist, local people and business that human development was limiting the turtles nesting areas. In some cases, the nests were destroyed. I paintend this piece in a small tight close cropped angle, to capture the idea of the turtles natural habitat is being restricted and limited.